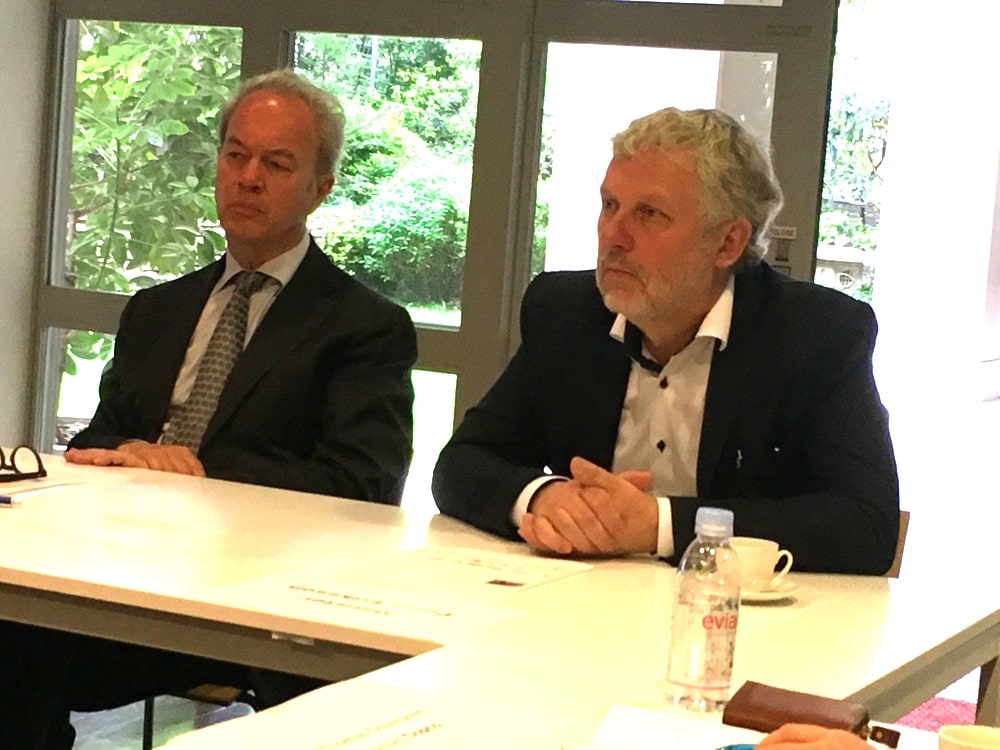 Peter Erikssons, Sweden’s Minister for Housing and Digital Development and former Spokesperson for the Green Party, was recently on a visit to Japan with the mission to strengthen the cooperation between our countries in the areas of digital development, sustainable smart cities and housing development utilising wood.SCCJ had the honour of hosting a breakfast meeting with the minister as our special guest, and we were also able to get some time with him afterwards for an interview.

The meeting started out with a short speech by the minister, where he began by comparing the culture of Sweden and Japan, finding them very similar in many ways, making cooperation in fields such as digital development and housing both possible and desirable. He continued with providing an update to the general situation for the Swedish economy. Even though Europe experienced a bit of a shock in the form of Britain’s Brexit decision, Sweden is in good shape. “Even though we are running with a minority government, we have managed to form a broad coalition around ways to solve our problem issues, and it is clear that this is working well. Sweden’s economy is running at a very good clip, with one of the highest growth rates in the EU area for a number of years now. In fact, our employment rate is at 81%, the highest Eurostat number ever measured,” the minister said.

The present government has created some 150,000 new jobs since it was formed in late 2014, and the biggest problem for the country, according to Eriksson, is actually a lack of suitable personnel. “There is a matching problem, where the number of available jobs exceeds the number of suitably educated people, but we are catching up pretty quickly. More jobs obviously improves the economy, and our national debt is now down to around 30% of GDP and it continues to shrink, which means we are in a very good position to focus on improving our competitive strengths”, the minister said.

Another issue that Sweden is working on fixing is the relative lack of housing in expansive areas. There is a need for some 100,000 additional apartments, and the production has seen some significant ramping-up in scale in recent years. The production rate is now two to three times higher than it was three years ago, and gains have been achieved in the area of advanced industrial production of housing. Thanks to advances in construction technology, environmentally superior wooden housing with three to five stories is now possible.

After the breakfast meeting, we had a chance to sit down with the minister for a more intimate chat.

Q:  A number of years ago, the Swedish government offered tax incentives in order to allow for more people to purchase personal computers. This lead to an explosive growth in PC ownership and to a large increase in the interest in and knowledge of all things IT-related. Today we have new buzzwords like digitilisation and Big Data. Any thoughts on government initiatives to allow for a similar “big jump”?

A: Yes, we have most importantly launched a broadband strategy that is absolutely world class. By 2020, 95% of all Swedish households will have access to broadband internet with a speed of no less than 100 Mbit/s. By 2025, 100% of households should have access to fast broadband, with 98% having at least 1 Gbit/s, 1,9% having at least 100 Mbit/s and the remaining 0,1%, some 10,000 individuals living in very remote areas, having at least 30 Mbit/s. We are able to do this by using the smartest technology available to connect fibre networks with radio links in rural areas. We are investing some 5,5 billion SEK during the present term of office in order to create the infrastructure to make this a reality.

This initiative will create a very interesting Swedish market for solutions and service providers in many fields. One very important such field is telemedicine, where we want to provide the whole of Sweden with access to prompt healthcare. Many long trips to the hospital in rural areas can be avoided with check-ups made possible using broadband internet.

Q: There’s a lot of talk about the so-called “digital divide” where especially elderly people are being left behind due to a lack of education. Any thoughts about this?

A: Yes, that is clearly a problem that we are trying to solve as soon as possible. Sweden has a relatively speaking high level of IT literacy, also with older people, but the situation can and will be improved further.

Q: Germany has recently become known for its “Industry 4.0” initiative, where the country aims to digitilise its production industry. Anything similar happening in Sweden?

A: Yes, we call it “Smart Industry”. It is a cooperative project between government and industry with a similar aim to the German project. Our large manufacturing companies are very quickly gaining momentum in this area on their own, so we are concentrating on helping the smaller companies get up to speed here with different projects aimed at different parts of the industry.

Q: In Japan, Sweden is well-known for its generous immigration policy. Japan is not working in the same direction, being afraid of socioeconomic consequences with a large influx of refugees. In Sweden, immigrants are seen by some as a possible problem, but also viewed as an opportunity for the country. What are your thoughts?

A: By and large, immigration has been a clear positive for Swedish economy. We do see a higher rate of unemployment in areas with a larger number of immigrants, but this is rapidly shrinking now. The industry is crying out for labour and where government initiatives aren’t enough, many companies take matters into their own hands, offering inhouse Swedish education.

A: Yes, the changing demographics of Japan is and will increasingly become a financial burden for Japan. Sweden is getting older, too, and we see immigration as one way to compensate for this. Many newcomers are more than willing to work hard to become supporting members of society.

With many new citizens arriving, we do have a problem with housing, though, and this is something we want to remedy as soon as possible. The government has allotted 6 billion SEK to new housing development, and we are now building 65,000 new flats during this term of office, compared with 20-25,000 during the last term.

Q: This is you first visit to Japan. Any first impressions?

A: Well, perhaps the fact that everything is so clean and orderly. Sweden is not bad in this respect, but Japan is clearly in a league of its own. I wonder if this is an entirely good thing, though.. Perhaps the Japanese are a bit too disciplined? Still, it is impressive and gratifying to see how the Japanese people seem to do everything with great pride